Over a number of years we have participated in the partnership sponsored by Baltimore Presbytery and Kakchikel Presbytery headquartered in Chimaltenango, Guatemala. 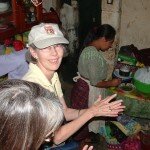 Individuals and groups go down to learn more about the Mayan culture and the church in that region.  They visit the Herb Valentine Clinic, the center for training pastors, schools, and various faith communities in the villages.

Find out more and sign up for a mission trip today!

The Baltimore Presbytery’s Mission Partnership with
The Kaqchikel Presbytery of Guatemala
May, 2012 Prayer Letter
Dear Friends, 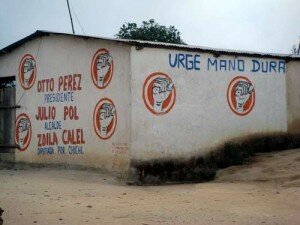 This rural public building is in the community of
San Marcos Pacoc, in the Department of Chimaltenango,
Guatemala. Pacoc is one of the Kaqchikel Presbytery’s
Communities of Faith that participates in the work of our Mission partners.

Here’s the irony that sparks this month’s prayer:
In mid January, national elections were won by the Mano Duro party. Guatemalans brought General Otto Perez back into power because he promoted a “strong fist” against crime; gangs, drug traffickers, political corruption, and all the miscreants that prey on the powerless; rural, indigenous, and often female Guatemalans. General Perez is suspected of civil war genocide against the
Indigenous people in the 1980’s.

Yet, within the first week of Mano Duro’s election, the home and family of the Kaqchikel Presbytery’s director, Ronaldo Similox, suffered an armed invasion. In mid-April, two young women from Pacoc were assaulted on their way home from attending classes at the Presbytery’s Institute for Reformed Theological Study [this trains lay ministers]. Both crimes were reported to local and regional authorities, and no one has been apprehended. Investigation is shoddy and perfunctory. Based on Guatemala’s history of strong-arm generals’ leadership, we can only conclude that the Mano Duro protects only the wealthy and important citizens and that it keeps a close eye on any organization whose impact is sufficient enough to be noticed by authorities.

The sadness and outrage we feel does nothing to restore the emotional trauma and physical health of the beaten 21 year old and the violated 16 year old women. It does nothing to return the information and privacy confiscated from Ronaldo’s home.

This Month’s Prayer: Experiences such as these highlight how much people of good intent long for the greater unveiling of God’s reign right now. Is it enough to pray for it? For most of us, distant from the beatings, rapes, invasions, terror and petty crimes, prayer is our main resource. And it is a mighty resource!
So I ask you to pray for
• the physical, emotional and psychological restoration of Gloria and Hilda;
• the apprehension and prosecution of the 5 youth who attacked the girls;
• the apprehension of the 9 men who invaded the Similox home;
• the reversal of the Mano Duro party’s practices; and
• the continued cancer healing of PCUSA Mission Co-Worker in Guatemala, Karla Koll.

For the mission partnership in Baltimore,
Bonnie Clarke [[email protected]]